Everybody experiences the world, including content they access on the internet, in their own way.  How individuals experience content on the internet can be vastly different depending on the computer or device and size of the screen on which they view it, and how they interact with it.

For example, while some people read text and interpret images they view, others use assistive technology to listen to content using a screen reader.  Meanwhile, some people click on links using a mouse or similar device, while others navigate using a keyboard or by tapping on touch screens.

Improving the accessibility of content is about reducing basic barriers to comprehension, such as providing alternative text for images, so that those who cannot see the images can grasp their meaning.  Similarly, making captions or transcript text available for a video file can make it accessible to someone who cannot hear audio.

The next section on this page contains a photograph with no alternative text.  It is an example of very inaccessible content.  The reasons why it is inaccessible will become apparent by the number of questions we need to ask and answer in order to understand its content.

What is depicted in the image below? 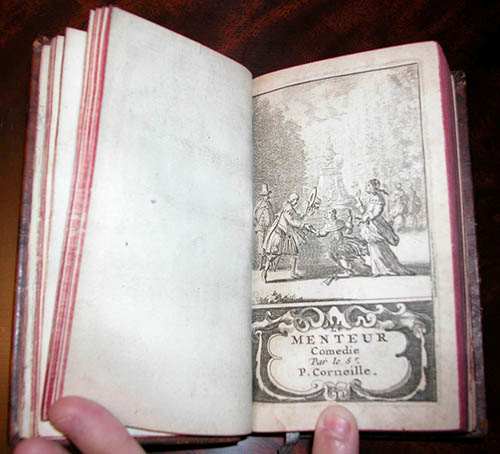 The photograph above depicts a title page of a book that was published in 1682. Unless you're curious about this image, which is irrelevant to the topic at hand, you might want to skip to the next question: Why is the content of the image above inaccessible?

The book in the picture contains a play, titled Le Menteur, a French comedy written by Pierre Corneille.

At the top of the page in the photograph is a frontispiece, a picture of a scene from the play.  This frontispiece contains some of the following information:

Underneath the frontispiece is a decorative border that surrounds text.  The text indicates the title of the play, which it is a comedy, and that it was written by Pierre Corneille: "Le Menteur / Comedie / Par le Sr. / P. Corneille."

Why is the content of the image above inaccessible?

Below are just some of the reasons why the image above might be inaccessible.

Certain types of content tend to be more inaccessible than others.  Below is a list of the worst offenders that can cause barriers to comprehension when they are not marked up for assistive technology to present them adequately or when they lack critical contextual information.  Select an item in the list for more information on how to make it more accessible.